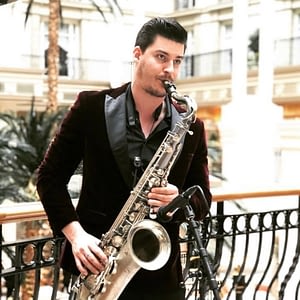 Ben graduated from the Royal Welsh College of Music and Drama in 2013 with a BMUS in Jazz saxophone and subsequently moved to London, where he studied at Trinity Laban conservatoire on a scholarship and graduated in 2014 with a Masters degree in Music.
Since then, his versatility as a musician has made him an in demand performer on the London and international music scene playing for a wide range of bands in a multitude of genres. Ben was the official lead alto dep in NYJO immediately out of college, he is the sax player for a number of experimental and commercially successful groups such as ‘ MF Robots’ (Brand New Heavies) ’Sam and the Womp’ and ‘More is More’ with whom he has toured internationally and performed at festivals such as Bestival, Secret Garden Party and Boom Town.
Ben regularly appears at renowned London jazz clubs such as Ronnie Scott’s, The Jazz Cafe,The Vortex and The Spice of Life as a side man and with bands under his own name. He has played with an impressive array of critically acclaimed artists ranging in style and genre from Lennie Kravitz (Vibrations World Tour), Beverley Knight (Young Voices Tour), Zalon (Amy Winehouse), Beardyman and Lee Ryan (Blue) to Johnny Dankworth, Kenny Wheeler and Norma Winstone in such recognisable venues as The Royal Albert Hall, The National Indoor Arena, the O2 Arena, Prague 02, Munich Olympia and the London Shard to name a few. Ben is resident saxophonist at the exclusive Arts Club bar and nightclub in Mayfair and can also regularly be found at venues such as Quaglino’s ,100 Wardour street, Kensington Roof Gardens and Madisons
BOOKING ENQUIRIES